Entering his third season with the Avs, libero Blake Thomson is continuing to live a dream that he never thought possible. Using his never-quit attitude, he’s hoping to help lead the COTR men to their first-ever PACWEST title this year.

Standing at 5’10, most people wouldn’t see Blake Thomson as a small guy.

But in the world of competitive volleyball, the third-year libero for the College of Rockies Avalanche was often told that he wouldn’t make it far in the sport.

Despite being a talented player, playing at the college-level seemed impossible because of his height.

“Everyone always told me I wasn’t tall enough to play volleyball at a higher level,” Thomson says. “But that didn’t stop me from working hard at practice day in and day out.”

In his third and potentially final year with the Avs in 2017-18, as one of only two returning starters and a team captain, he doesn’t think about his height at all anymore.

“I don’t really [have any of those doubts] after playing here for two years,” he says. “I know that I’m [good enough] to be here [and] I just love the sport.”

Originally focused on baseball, Thomson grew up just outside of Red Deer, Alberta as an athletic kid and took to volleyball in sixth grade — the time just about everyone in Canada first plays in gym class.

From the moment he started, he never wanted to stop.

“I just loved coming to practice every day. It didn’t feel like I had to do it, it was enjoyable,” he recalls. “I loved it so much that when the season ended, I couldn’t wait to start again the next year.” 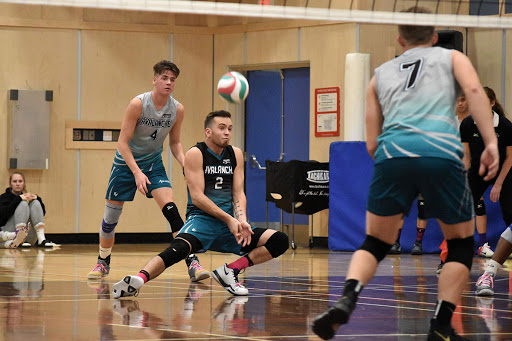 Quickly falling in love with the team dynamic of volleyball, he went on to have a very successful career at Hunting Hills High School where he was a left side hitter.

“My high school did really well in our league,” Thomson recalls. “We were always playing for a city championship and were usually really high [ranking] in provincials.”

Without even seeking recruitment, the undersized talent was noticed by the Avs and was soon whisked away to an ideal situation.

“Getting the opportunity to play for COTR was an amazing chance to keep playing the sport I love,” he remembers. “I didn’t have to try out, they just watched videos and invited me to come to the school.”

Not only was he given an opportunity to continue his athletics career, but the academic possibilities at COTR perfectly suited his future aspirations in the workforce.

“I was always interested in that sort of thing, growing up [and] in high school,” he remembers. “I’ve been a big snowmobiler from an early age, [so] that’s where [my interest] in mechanics sort of began, with fixing it [and] all that.”

While he is thrilled to wear heavy duty work boots in class, when he’s on the volleyball court he’s quick and light on his feet — although he’s still not afraid to get down and dirty to make a dig.

As a libero, a special defense-only position suited to shorter players, Thomson is usually responsible for making his team’s first bump and saving balls that are violently spiked onto his side of the court by the opposition.

While he didn’t know much about playing the position before he was assigned it at COTR, he quickly found success as the team’s go-to guy defensively.

“It wasn’t a huge adjustment playing libero because I already loved playing defence,” he says. “[The] only difference was [that] I couldn’t hit or block, [but that’s been fine].”

Thomson joined the Avs straight out of high school as part of a very strong 2015-16 recruiting class, which included current teammates Julio Lins and Chris Dzioba, as well as Patrik Toze, an Australian outside hitter who put up the second most kills in team history.

“Coming into COTR as a rookie was [a] very nerve-racking time, but the team welcomed everyone in and we all bonded pretty quickly,” Thomson says. “Now, being in my third year, I have more responsibilities, but I love being one of the leaders on the team.

“Having the younger guys ask questions about previous years and about the league, it really makes me feel like I’ve come full circle.”

In his rookie year, Thomson was part of a team that made the PACWEST provincials bronze medal match. Unfortunately, they lost 3-0. In his second year, the men’s Avs finished in fourth after the regular season, only to lose in the quarterfinals.

This year, he has high aspirations for Provincials gold and hopes to get there with his third new head coach in three years.

Learning under current women’s head coach John Swanson is his first year, Herb Tepper took over for 2016-17 before being replaced by newcomer Cisco Farrero this season.

“Every year has kind of been like starting over again, learning a new style of play and coaching,” Thomson says. “It’s been a little different, but it’s also good learning the game from three different perspectives… it’s helped a lot in becoming a [more well-rounded player].”

Although the team has struggled slightly out of the gate this season, with a 1-5 record after their home opening weekend and road trip, Thomson still sees the Avs as one of the better teams in the conference. 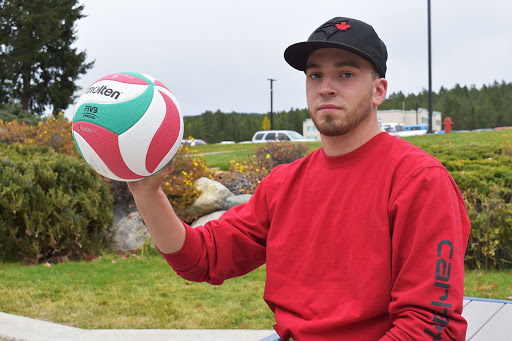 “A Provincial title is definitely possible [for us],” he says. “We just have to work hard all year and make every touch in practice and games count.”

He added that his favourite part of being at COTR is playing volleyball on the Avs home court in front of the often-raucous crowds. He also enjoys the feeling of belonging to the close-knit family of COTR’s athletics program.

“Even in classes, there’s always someone you know from the volleyball program, who you can go to for help,” he says. “It’s just a great community.”

Although Thomson still isn’t sure if this season will be his swan song before moving on to the working world, he still loves going to practice every day.

Whether it’s his last year or not, at the end of the season, there’s no doubt he’ll get the same feeling he did when he first started — he’ll want to do it all over again.

The Avs next match is on Friday, November 10 at their home court against the Vancouver Island University Mariners. The women kick off the night at 6:00 p.m. and the men play at 8:00 p.m. Both teams then play again on Saturday, with matches at 11:00 a.m. and 1:00 p.m., once again against VIU.

Nominations open for RDEK Volunteer of the Year