The Cranbrook Jr. Bandits 14U team are hosting a tournament this weekend for 13U and 14U teams from across British Columbia and Alberta.

The “Jr. Bandits Slugfest Tournament” will be held at Moir Centennial Park from Friday, July 7 to Sunday, July 9 and will feature seven visiting teams from Kelowna, Lethbridge, Calgary and the West Kootenays.

Each team will play three round-robin games before being seeded for the playoffs. The tournament will then end with a championship game for both the 13U and 14U pools.

The Cranbrook team will kick off their tournament on Friday night against the Calgary Jr. Dinos at 6:30 p.m. They will then play their second game on Saturday at 11:30 a.m against the Lethbridge Giants. Their third game will be held that afternoon at 4:30 p.m. against the West Kootenay Orioles.

The full schedule for the tournament is below: 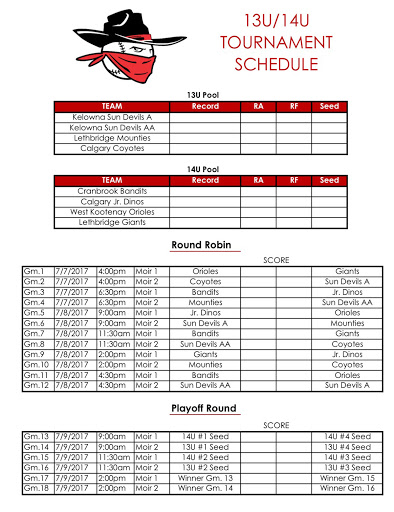 The Cranbrook Jr. Bandits 10/12U tournament will be held at Confederation Park the following weekend from July 14 to 16.

Cranbrook Bandits ‘B’ team continues to struggle in Medicine Hat